Have you heard the news? The Information Age is over. We live in the Meme Age right now. Cold hard facts do not excite people anymore. Normal ads are becoming parodies of themselves. We had a guy who became the most powerful man in the world for 4 years by trolling the media and their holier-than-thou attitude. Tommy Wiseau is a cultural icon. We have become too self-aware. Postmodernism has won.

I watched a video by Yahtzee Crowshaw recently which made me realize something important about the current state of video games (and culture in general). That video was titled “Why Was Prey (2017) So Forgettable?” In the video, Yahtzee argues that Prey was basically flawless. It was everything he was looking for in a single-player game. But he can’t remember a damn thing about it.

What was the problem? It all boils down to one thing: the game didn’t have any meme-worthy material. It was too pristine. Too perfect. It didn’t have any of the memetic material in its more memorable predecessors. Prey was compared to a polite straight A high school student who has no friends, because his perfection puts people off. It sucks to put so much effort into being perfect and then realize you never left a mark in anyone’s heart. The question is how to stay clear away from that fate?

Back in early 2021, Capcom introduced Lady Dimitrescu and her daughters in the promotional material for Resident Evil Village. The internet went berserk. There were so many memes and fanart made about “the tall goth vampire mommy” that everyone and their grandmother got exposed to. Basically, the game’s commercial success was due to Dimitrescu’s memetic mutation. You wouldn’t be able to guarantee that successful result over some ordinary 50-million-dollar advertising campaign.

So why did Lady Dimitrescu become a meme and helped Resident Evil Village to become a household name through Cultural Osmosis? What about her turned so eye-catching?

For some reason, people find the idea of “something not being what it’s supposed to be” hilarious and memorable. Let’s take a look at some of the things that became famous video game memes to prove this theory: 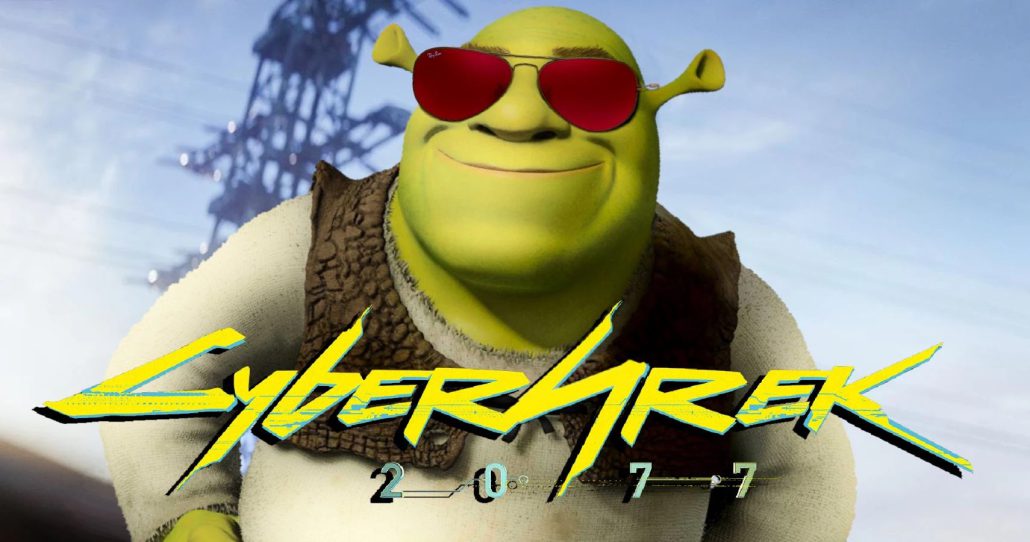 As it’s obvious from these examples, meme-worthy materials are not always intentional or even desirable (like in the case of Cyberpunk bugs). But nonetheless, they help a game to find its way into the collective memory of the gaming community.

I said they’re not always intentional. Well, ideally they shouldn’t be at all. For example, Horizon Forbidden West’s creators posted some gifs during the game lunch. In these gifs, some famous memes are recreated by the game’s characters. If you wanna check them out, see here, here and here.

While I personally appreciate the effort and would prefer these gifs to any official style marketing, it’s still obvious that this is a marketing technique and these gifs are an effort to pander to the meme culture that is prevalent nowadays.

What I’m saying here might seem at odds with what’s been suggested so far: If the best kind of memes are unintentional, how can you make a game that is meme-worthy? It might seem like this is something that’s outside of developer’s control, but it isn’t.

Let me give you an example: my Twitter Feed is still filled with Elden Ring posts, but now none of them are about how great the game is. People were done with those sort of claims after a month. Now all the posts are about how someone is doing something meme-worthy in the game.

One of them is about how someone defeated the game only using his butt.

Another headline that goes around is about a mysterious butt-naked player called “Let Me Solo Her” who has helped more than 300 players to defeat Malenia, one of the hardest bosses in Elden Ring. In his first play-through, he made 242 attempts to defeat her, but couldn’t. After this initial humiliation, he got good and now is helping people, so they don’t suffer the same frustration he did. He is being hailed as a hero in the Elden Ring community and people are making statues and modded spirit summons of him as a tribute. Elden Ring is a step ahead of everyone else, because not only it allows you to make memes of the game, it allows you to BE a meme in the game.

Outside of official headlines, I also see a lot of viral tweets about the game’s trollish message system and anime-like combat system. 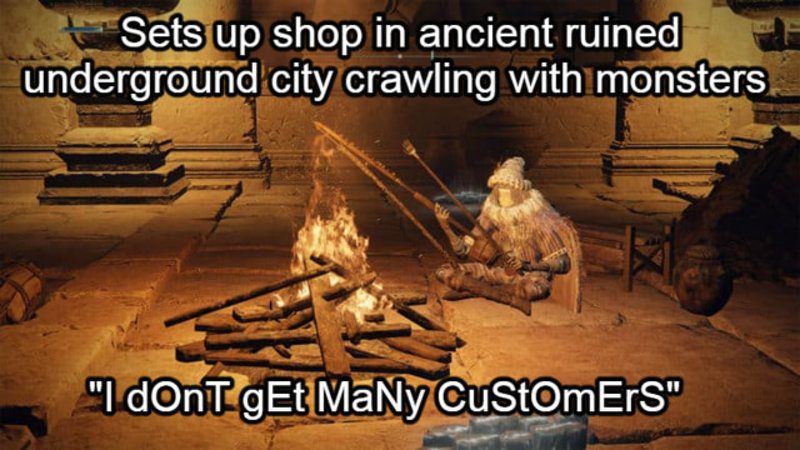 None of these headlines or tweets are the result of a direct meme put in the game by FromSoftware. They are the result of a gameplay and multiplayer system that has a lot of room for quirkiness to develop in it. These elements helped Elden Ring to live beyond the initial hype of its release.

And that’s exactly what I’m advocating here. Not direct references to memes and pandering to the meme culture, but designing the game in a way that allows the players to create memes of their own, memes that are based on their interaction with the game, not some funny stuff that is force-fed to them.

Now all of this talk brings us to a fundamental question: why are memes becoming so popular? If I had to guess, I would say that the meme culture is a collective response to the domination of the old-school media and corporations in our world and all the fakery they brought along with them. Ever since the 80s, corporations and media outlets have been putting out advertisements and announcements that make them look too pure, too professional, too perfect. But the problem is we humans are not like that. The weight of all that idealism is too heavy for us to carry. In our privacy we are crude, we act stupid. We see through all the social facades that we have created out of necessity and make fun of them.

In a way, meme culture is the representation of how we really feel about all this boring decorum we have created for ourselves in order not to answer to Karens every minute of every day. It’s a celebration of all that is crude, ridiculous and stupid in the things we create and put out there. We celebrate those things, because that’s just our humanity shining through. That’s how most of us really are in our private life.

Without memes, how could you properly address EA’s greed, Nintendo’s tendency to milk its franchises and Activision Blizzard’s ridiculous attempts at damage control? These companies spend millions of dollars on corporate-approved PR to make their scummy policies seem like a favor to the customer. Sometimes, all it takes to dismantle that is one well-made well-placed meme that shouts: you are just greedy corrupt assholes.

Memes, by their nature, are almost always about something human in something that is trying to be more. That’s why they are the perfect tool to cut through PR approved strategies and celebrate all the little things that relate to us in a work that might otherwise not be too relatable. That’s why I am saying people should be able to make memes out of your game. It’s not that memes are a sign of quality by themselves. But if they can be made, they represent something human in your game with all of its crude glory. People love that.